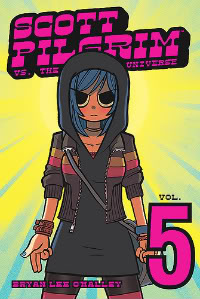 The big news out of the Oni Press panel at San Diego all revolved around Bryan Lee O’Malley’s Scott Pilgrim, with an announced title and release date for the fifth book.

It’ll be Scott Pilgrim vs. the Universe and it’ll come out at next year’s New York Comic Con. Other than that, all the news was of other books from the publisher.

Newsarama has some coverage.

James Lucas Jones moderated Oni’s panel, which featured a packed room of fans and at least a dozen Oni creators who Jones invited to the podium to talk about their titles as he announced them.

The panel kicked off with artwork for Billy Smoke by B. Clay Moore and Eric Kim. The book is about an elite hit man who’s nearly killed during a botched assignment. He decides his only path to redemption is to kill his former hit man associates.

Jones called it an “adrenaline-fueled thrill ride about an assassin on the path to redemption.” It debuts in early 2009. Matthew Fox has signed on to star in the film adaptation and was at the Oni booth some of the weekend signing autographs.