Review: This Week in Trinity – Part 8 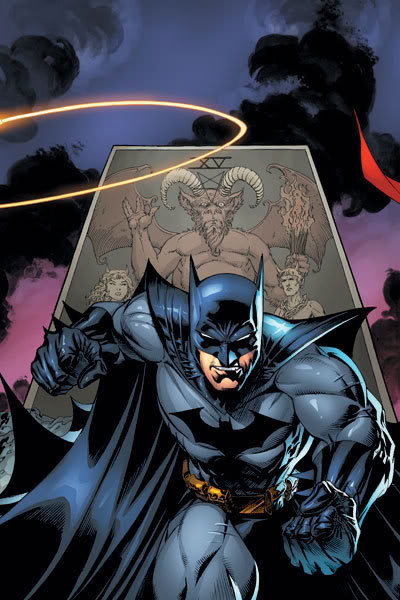 As Comic-Con starts to lull into submission (begin your hype for ’09!), I finally get a chance to sit down with the latest issue of DC’s weekly [[[Trinity]]] and ask myself again why I ever agreed to do weekly reviews.

Yes, the series is still so much better than [[[Countdown]]] that it’s useless comparing the two, but after last week’s big explanations of some of the major mysteries, issue eight has no tension among much weirdness.

At their disposal is the Cosmic Egg, which confused me, since last issue seemed to imply the JLA had the egg (and the villain inside it) stashed somewhere safe. Apparently they stashed it on the largest moon of Itatoq (miles and miles of sandy beaches!).

After that are scenes of the heroes going about their lives, still filling the generic roles prescribed to them by the universe (aka Kurt Busiek). Bruce is sleuthing, Clark is fighting robots and Diana is… shopping. Ahem.

Clark finds a techno beacon in Rabat, which he says is “an anchor for some sort of warpgate.”

That ominous tidbit leads into Bruce (in civilian form) being attacked by Le Fey’s stupid, stupid rat creatures, who are about to brand him with an Egyptian symbol (as was done to Wonder Woman) when the primary story comes to a halt.

Again, there’s still no establishment of what’s really at stake, and the issue too often falls into speeches and inner monologues about the nature of the three heroes. And after eight issues, those speeches are starting to sound like a broken record.

Things don’t improve (for readers) in the backup story, in which various random people (Hemi Kawara, Primat and Michael Cannefick) are apparently turned evil when the villainous trinity bring the cosmic egg to earth and unleash its power.

At least, I think that’s what happened. Scott McDaniel’s art was another miss.

Le Fey does reveal a little bit about what’s going on, that earth is the keystone of the multiverse, and that the three heroes can be made into the keystone of earth. Yet it’s all so esoteric that it scarcely constitutes a threat worthy of such an ambitious series.