ComicMix Six: Six Groups of People to Kick Out of San Diego Comic-Con 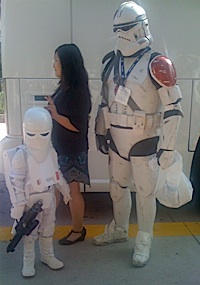 [EDITOR’S NOTE: As San Diego Comic-Con gets crazier and crazier, so does the mood of some of our ComicMix contributors. Case in point, the following ComicMix Six list that appeared in the queue earlier today from contributor Arthur Tebbel, who I’ve only managed to glimpse as he sprints from one panel to the next throughout the weekend. Here, Arthur offers up his thoughts on the six groups that he could do without at this year’s Comic-Con. -RM]

THE SECURITY STAFF: The assembled masses at any comic book convention are probably too meek to takeover a Starbucks, so why do we need what appears to be thousands of volunteer security guards to give us conflicting information and, most importantly, prevent me from being where I need to be to do my job. If these guys got drunk on as little liquor as they do power they would be in the emergency room after two beers.

STORMTROOPERS: Thank God we aren’t trying to run a Death Star, because we would be dramatically overstaffed. How did we get to the point where people go through all this trouble to express themselves in exactly the same way as everyone else? We respect the effort but… no, actually we don’t respect the effort. Try harder.

PEOPLE WHO BRING BABIES TO A PANEL DISCUSSION: Your baby won’t appreciate the discussion and, thanks to them, now I won’t either. Hire a babysitter; the convention will even look after your kid for you. If your child is too precious to part with for even an hour, go to the park instead.

PEOPLE WHO START THEIR PANEL QUESTIONS WITH “I DON’T READ/WATCH [PANEL TOPIC], BUT…”: These questions are always embarrassingly bad. What happened? Do you have some compulsion that makes you go up to any open microphone? Next year, we will most certainly go to a Battlestar Galactica panel and ask, “I don’t watch Battlestar Galactica but why aren’t there more tits in it?”

JESUS FREAKS: Okay, these guys weren’t in the convention exactly — but I could really do without people telling me how much I’m going to hell for my choice in media. Furthermore, this inspires legions of fanboys to trot out the same tired comebacks about how much they worship Satan or some such. No you don’t, Hell doesn’t have a basement you could live in.

ABOUT 20% OF THE ATTENDEES: Sometime before the show begins they need to assemble all of the con-goers for that day and someone (we’ll volunteer, in fact) will walk through the crowd and eliminate 20 percent of the people. These people will have their money cheerfully refunded and they can try again next year. Next, we’ll do this for the exhibitors.