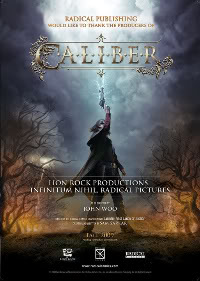 Comics and movies meet at Comic-Con, and this year Radical appears to be the most forward gal at the dance, so to speak.

The relatively new publishing company announced recently that a film version of its Old West action series Caliber is headed to screens with John Woo attached to direct. In balmy San Diego, they’ve announced another three series getting development deals.

The company has also made deals for Hercules: The Thracian Wars and the mecha book Freedom Formula. Blog@ notes:

Radical Publishing is introducing the five-issue series this week at Comic-Con, and will release the first issue in August. …

The comic, created by Edmund Shern, is set in a future in which racing exo-suits have replaced fighter jets. The story centers on Zee, a genetically engineered racer who transforms himself into the hero of a dying city.