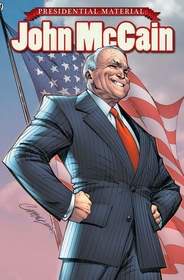 The trend of using comics in politics has been picking up steam of late, starting with the graphic adaptation of the 9/11 Commission Report to Dan Goldman’s upcoming 2008 campaign book to that nutso Oklahoma county commissioner who thinks he’s being attacked by Satan and gays.

Now IDW is jumping into the political waters with a pair of comic book biographies of the two (realistic) contenders for the presidency. The Presidential Material books feature John McCain and Barack Obama in what sounds like it’ll be a guide for voters.

At right is the cover of the McCain book, which I posted instead of the Obama one. Liberal media my ass.