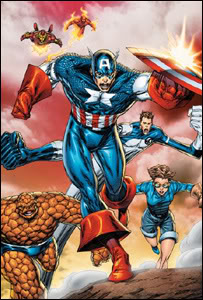 We may soon see the first film without feet, as director Bryan Singer is reported to be eyeing an as-yet-unseen graphic novel by Rob Liefeld.

Slash Film has the story.

Bryan Singer is in negotiations to produce Capeshooters, an adaptation of Rob Liefeld’s upcoming graphic novel which tells the story of two slackers who become superhero paparazzi. The duo uncover evidence that a legendary superhero is actually an undercover villain. I’m very excited that movie studios are still trying to find original superhero properties, instead of digging through the bevy of bottom of the barrel established franchise heroes. The bad news is that the screenplay is being written by J.P. Lavin and Chad Damiani, both of which work on Ryan Seacrest’s radio show and American Idol.

Liefeld’s art (from Onslaught Reborn) can be seen at right.