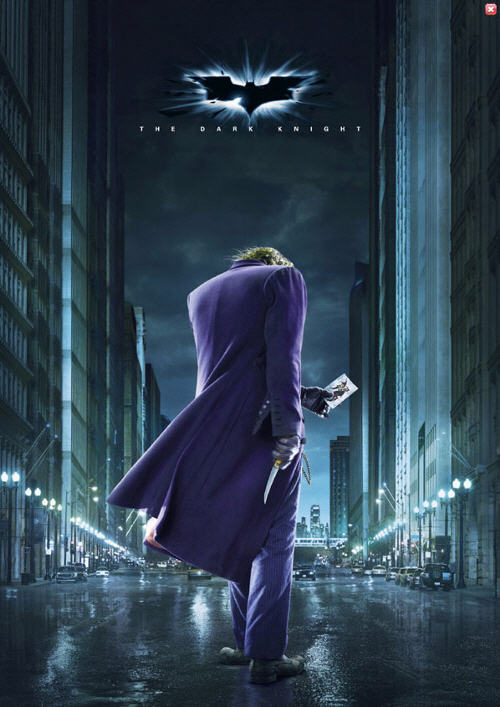 Considering the amount of massive blockbusters that have disappointed the fans this year, it is safe to say that all of your expectations will be met going into this movie. [[[The Dark Knight]]] delivers on so many levels that it becomes hard to critique it, and all that’s left is pure childlike enjoyment for approximately two hours.

, this film takes place shortly where we left off: Batman is patrolling the streets, crime is on the rise, and more and more “masked vigilantes” are stepping up to try and take out the [[[Batman]]]. Wayne Manor is still destroyed, so all of the caped crusader’s hijinks are based out of a new penthouse apartment, which is a nice change. Batman’s gal Rachel Dawes (originally played by Katie Holmes) returns, this time played by Maggie Gyllenhaal. This time, instead of Liam Neeson and Cillian Murphy filling the evil quota as Ra’s Al Ghul and Scarecrow, respectively, we get the late Heath Ledger and Aaron Eckhart as The Joker and Harvey Dent, which of course means we get to see a little Two-Face!

[SPOILER WARNING: READ ON AT YOUR OWN RISK]

Joker’s role acted as an unstoppable force that barrels through the film, causing chaos. Even stated by Ledger in the film, Joker is an agent of chaos, and nothing more. The world of Gotham City and all it’s inhabitants are completely rocked, leaving both their white and black knights down — but not out — by the end of the film.

The performances are what made the first film so memorable, and the bar is only raised in this second incarnation. Christian Bale’s Batman gives chills to the point where his voice actually trembles the theater when he speaks. Eckhart played the boy scout Dent to a tee, and then in his inevitable turn, it becomes only that much more powerful. The only weak link here was the new Rachel Dawes, in Maggie Gyllenhaal. Katie Holmes’ take in the first film wasn’t really a big performance to top, seeing as how she was considered the weak link last time around, but Gyllenhaal comes across as blasé and unimpressed. It almost makes sense why they went in the direction they did with the character.

This brings us to the MVP of the film, Heath Ledger’s Joker. Granted, this performances has been pumped up for months, ever since his passing, with rumbles of Oscar nominations and such. None of these reviews can prepare you for Ledger’s performance. His on-screen presence gives complete chills and you can believe from start to finish that this psychopath exists, and isn’t just a role in a movie. Joker sets the mood for the entire film, which is of course incredibly dark and twisted.

One big concern about Ledger’s major performance is that IF he were to get a nomination or even an award for the role, this will inevitably bring other up-and-coming actors out of the woodwork to use the Batman franchise as a career steppingstone. This happened once before with Nicholson’s performance. Tommy Lee Jones was questioned about his laughably bad role as the first Two-Face, and he simply stated that Nicholson went over the top and everybody loved it, so he was trying to get the same reaction. It now falls in the hands of a competent director like Nolan to police this and prevent it from happening.

The fight sequences are a huge improvement from the first film. There were a lot of jump cuts during hand-to-hand combat sequences last time around, which made it feel like a bad episode of Buffy The Vampire Slayer

, but this film stepped up, giving us the pleasure of watching Batman kick ass. The CGI sequences are almost seamless — especially when the second villain of the film shows his face(s).

This film is over two hours long, but it almost never drags, and keeps you entertained with character development and action sequences the likes of which probably won’t be replicated until we see a third installment from this crew. I recommend seeing this film in a regular theater the first time, then going again to IMAX, because the sheer amount of visuals and information that you need to take in the first time may cause you to bleed from the eyes in a screen that big. Go see [[[Dark Knight]]].