Comic-Con and the Art of Motorcycle Maintenance 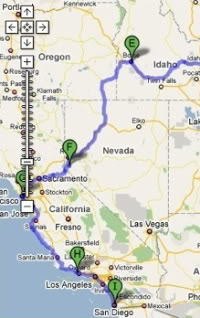 While everyone’s getting excited about the big stars and events coming up at next week’s San Diego Comic-Con, the best story of this year’s con is just starting to unfold.

Ryan Richards is a relatively unknown comics creator, and he’s on his way to San Diego. He’s going for the con, but he’s also headed west to meet his father for the first time. For the full story, you can check out Ryan’s blog.

At the moment, he and his motorcycle, labeled "Stark Industries," is somewhere in Idaho or possibly Oregon. Here’s a post titled "Dr. Strange Hands":

When you ride for eight hours, your hands don’t quite work right. they move like they’re frozen. I’ve been trying to eat more bananas for the potassium to prevent cramping, it works but I catch my hands twitching the little fleshy tendon webbing between the thumb and first finger will pulse and spasm irregularly. It doesn’t hurt or anything just feels like I’m trying to type with electrified jellied hams.

I’m now in Dillon Montana, which I am going to say was named after Steve Dillon. Stopped in Manhattan on the way.

He’s taking donations to help pay for the trip, if anyone’s interested.