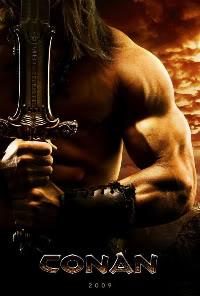 There’s a new Conan movie on the way, supposedly headed to theaters next year.

Granted, there’s no director, no cast and no crew (so far as IMDB knows), but there is the image at right.

IMP Awards has the first poster for the film, and it looks about exactly like what you’d expect it to look like. Big, muscly guy with a sword.

Maybe it’ll be a shot-for-shot remake, like the Gus van Sant Psycho.

Since we’re on the topic already, what actors would you like to see cast as the sword-wielding Cimmerian?