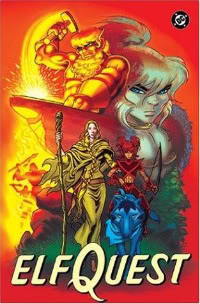 One of the more shocking moments in my life came when I was pretty young and randomly picked up an Elfquest comic book. Tolkien’s stately creatures, these are not.

Now, after years of failed efforts to get the property to screens, Warner Bros. appears to have made major headway toward an Elfquest movie, going so far as to announce a writer/director/producer.

The original comic, which Wendy and Richard Pini initially self-published in 1978, followed a tribe of elves known as the Wolfriders in their attempts to survive and link with other dispersed elves on a Earth-like planet with two moons while on the lookout for tribes of humans and trolls, both of which acted as allies and enemies.

The series — later published by both Marvel and DC Comics — attracted a more mature audience as it went along, with scenes of battles and sexuality that were intense for that time.

Rawson Thurber ("Dodgeball: A True Underdog Story") will write, direct and produce the feature, whose format is undetermined.

One can only wonder how graphic the film will be, and if a whole new generation is set to be startled.