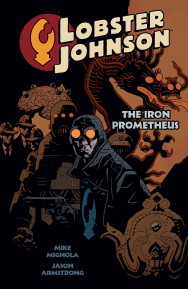 Lobster Johnson is the mystery man of the Hellboy

universe – an enigma wrapped in a riddle folded around a right cross. He’s turned up in [[[Hellboy]]] and B.P.R.D.

stories several times, but about all we’ve learned about him is that he was some sort of pulpish hero from the 1930s and that he punched a lot of evil things.

So here we finally get Lobster Johnson’s own story…in which he’s a mysterious, pulpish hero in 1937 New York who punches a whole bunch of evil things. The Lobster does have a secret lair, which gets some on-page time, and a group of [[[Doc Savage]]]-esque helpers – but we still don’t know who the Lobster is, why he fights evil, or even the point of his lobster-claw emblem.

On the other hand, we do get a vril-powered (look up your Edward Bulwer-Lytton) super-suit; its wearer, ex-lab assistant Jim Sacks; his kidnapped scientist employer Kyriakos Gallaragas; and the doctor’s requisite lovely daughter Helena, also kidnapped. Not to mention their kidnapper, an evil Asiatic villain.

(Said villain looks very familiar from other Hellboy stories, but he’s not named here, so I’ll leave it at that.)

We also have Nazis (in a submarine!), a couple of monsters summoned/created by our Yellow Peril, and the usual assortment of goons, thugs, and palookas whom the Lobster and the powered-suit of Mr. Sacks pummel almost from first page to last.

[[[Lobster Johnson]]] is less dense than Hellboy; it’s a pulp story, so it doesn’t slow down for exposition about Aung Rama, or who the Yellow Peril dude is, or even to explain the details of the Lobster and his battle against crime. (There are three text-page features, ostensibly articles explaining the history of the Lobster in popular media, but they focus on pulp stories, comics, and Mexican wrestling movies.) There are good guys, and there are bad guys – the story makes it clear which is which, and then they fight.

The Lobster and Mr. Sacks get into trouble, and get out of it – as much as they do get out of it – by the usual pulp strategy of judiciously applied violence. The villains are briefly thwarted by the end, but obviously neither the Nazis nor a guy Hellboy will beat up a generation later can be disposed of in 1937. Lobster Johnson is not a deep read; it’s not even as thoughtful and folkfore-infused as many of Mignola’s Hellboy stories. However, it is a fine old-fashioned punch-fest, with cheerable heroes and hissable villains, not to mention the gorgeous scientist’s daughter in her underwear. It’s fine ‘30s style pulp translated into comics form, and the world is that much more garish and exciting because of it.