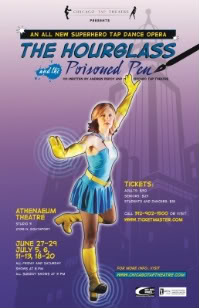 If you’ve been enjoying Andrew Pepoy’s The Adventures of Simone & Ajax, published here at ComicMix, you’ll want to check out another of his comic book-related projects: A superhero tap dance opera.

While that phrase might seem like a Googlenope, the recently debuted The Hourglass and the Poisoned Pen is a sequel to The Hourglass in the Stop-Time Chronicles. The show is put on by the Chicago Tap Theatre, and is running at the Athenaeum Theatre in Chicago. (Show dates at the link.)

From an article at the My Dance Place blog:

Kendra Jorstad, who played the role of the Hourglass last year, has suited up again for a production that promises success even greater than that of the original show.

While speaking with DanceHere right before the show’s opening, [artistic director Mark] Yonally said that this year’s budget for Hourglass sets and costumes was more than twice what it was last year. And, they devoted twice the amount of time on developing the new story. "The good news," Yonally said of the increases, "is you see all of that on the stage."

The Hourglass set, alone, is stunning. Designed with comic book artist and Hourglass co-creator Andrew Pepoy, the set pulls audiences into the super-heroine’s world, where the good–in the form of a young woman wearing canary-yellow go-go boots–can subdue all wrongdoers. With the new set, costumes, story, and his company of dancers, Yonally thinks that The Hourglass and the Poisoned Pen is CTT’s "best story show by far."