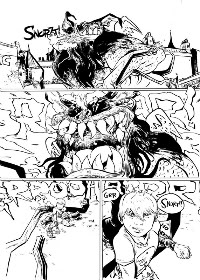 Paul Pope is in the midst of making a new comic about a kid who has to fight his way through "Monstropolis," and he’s been kind enough to post a quick preview on the blog of publisher First Second, which is putting out the book.

There are two black and white preview pages — one is seen at right — that detail a small moment in the book, as the main character, Battling Boy, fights "Humbaba, the toughest monster (or maybe at least the oldest — Humbaba can be traced back to Gilgamesh; he is the guardian of the edge of a city, or the place where a forest meets the edge of a city, as you prefer)."

While Pope has often ventured into somewhat harsh territory, there’s an almost Bone-ian vibe of innocent wonder coming from these pages, but it’s far too little to judge. Here’s some of what Pope had to say about the book:

Battling Boy is the son of a god or a super hero—it is left unspecified—who comes down from the top of a mountain (or rather, from inside a cloud/UFO contraption/contrivance from above a mountain top) at this father’s behest, in order to rid a giant city from it’s plague of monsters. Hercules had his labors, Batman has his Gotham, Battling Boy has his Monstropolis.

Monstropolis is a city the size of an entire continent—and it is absolutely overrun with monsters. These are horrible, Grimm’s fairytale, Beowulf-ish monsters, awful things. Child-stealers. Plus some of the vampires and mummies and wolfmen we remember from the old black and white Hollywood horror films. Which—if you remember—aren’t very funny. And they don’t all like each other, either. Even a monster can’t stand another monster, this has been proven time and time again.