J.G. Jones on ‘Wanted,’ ‘Final Crisis’ and his Newspaper Background 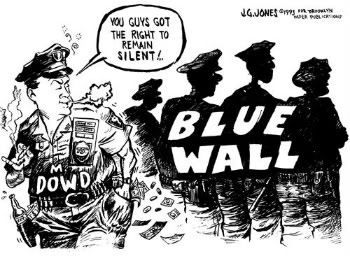 So far, the one saving grace of DC’s Final Crisis has been the superlative artwork of J.G. Jones, previously best known for his stunning covers to DC’s weekly series 52 and the art in Mark Millar’s Wanted.

Out of the "little known fact" department comes a profile of Jones in the Brooklyn Paper, where he previously worked as, among other things, an editorial cartoonist. I wish the paper would’ve reprinted more of his cartoons, but at least they pulled from the archives the one seen at right, which shows some skillful inkwork and an economic use of space to push a complex story.

The article is quite a good read, touching on many interesting subjects, including how the newspaper experience helped Jones succeed in comics.

“There’s no question that creating on deadline is the best experience,” Jones told The Brooklyn Paper via phone from his West Orange, N.J. home. “It’s the same thing in comic books. Just like at The Paper, we have some very long nights.”

Back in his glory days at The Paper’s old headquarters at 26 Court St., Jones worked part-time while he pursued his larger dream: to be a painter.

Ah, but that dream, like so many other dreams that newspaper people cling to like battered childhood dolls, never quite worked out.