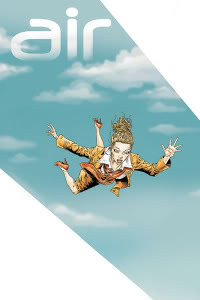 G. Willow Wilson is a fascinating person for many reasons, not the least of which is that she writes really cool comics. Her path into comics is one of the most unique in the industry, though.

Wilson was born and raised in the United States, later converted to Islam and moved to Cairo to work as a journalist. In her spare time she worked on the graphic novel Cairo, a story of magic and mythology set in Egypt’s capital city that came out from Vertigo last year.

In August, Vertigo releases the first issue of a new series by Wilson and Cairo collaborator M.K. Perker, titled Air. It features a stewardess who’s afraid of heights and becomes embroiled in a fight for a new, magical energy source.

I spoke with Wilson about the series and her upcoming memoir.

COMICMIX: When did you start working on Air, and how did the idea develop?

G. WILLOW WILSON: I started working on Air several years ago as a straight prose novel. But I stopped one chapter in and decided it had to be a comic book. After we wrapped up Cairo, Karen Berger asked me if I had any strong ideas for an ongoing monthly with a female lead character. I hemmed and hawed and pitched her a couple of mediocre things. Then I had a clandestine ‘Duh’ moment and pulled out Air. You always have a certain feeling about ideas you know are going to gel and be great, and I had that feeling about this story. Happily, so did Karen.

CMix: What were some of the inspirations for the project?

GWW: It’s the moments when you feel most trapped that true escape is possible. That’s really what this book is about. Walking into an airport as a Muslim pretty much sucks — you have to de-Islamify yourself as much as possible (I never carry a Koran on the plane with me, for instance; I always pack it in my checked bag) in order not to make security people and other passengers nervous. Yet flying is still the most magical, surreal form of travel we have. So I wanted Air to both examine this tense political atmosphere and shed it, escape from it, use it as a jumping-off point for the totally unreal.

CMix: An acrophobic stewardess seems like a natural contradiction. How did Blythe come about? What makes her so interesting to you?

GWW: I’ve noticed that while my male characters all stem from the environment around me and people I know, my female characters are always reflections of myself in some capacity. I’m an organically conflicted person, so I tend to build contradictions into my female characters. Stress helps you figure out who you are, and I wanted a character who was under stress. Blythe begins to undergo rapid changes starting in the very first issue, and that makes her interesting to me. Of any character I’ve ever written, she’s probably the closest to who I am in terms of personality. MK has actually slipped up and called me Blythe on more than one occasion.

CMix: I’m sure you fly quite a bit. Have any horror stories?

GWW: Holy crap, yes. For a short while I was actually investigated under the Patriot Act — that’s a long story, and I’ve talked about it elsewhere. Because of this, I was fairly certain that I was going to be arrested when I entered the US for the first time since moving to Egypt. Fortunately I wasn’t, but a guy in a camel trench coat (how classic is that) did semi-covertly take my picture as I got off the plane. It was like being in a spy movie. That was pretty weird.

CMix: Issues of identity and assumptions based on superficial features (i.e. skin color) played a very big role in Cairo, and they’re once again evident in Air. How are the two projects similar and different in that regard? 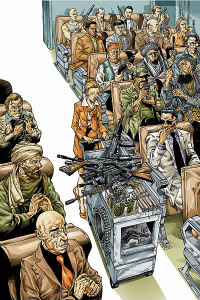 GWW: Air takes a much broader view of the issue of identity — it should hit close to home for a large cross-section of people. It also complicates our idea of what’s right and what’s wrong and who is on whose side. "Who are the good guys" is a big question in the series.

CMix: You bring some mystic and spiritual elements in, which was also present in Cairo. Why is that so important to your writing?

CMix: Do you have a finite number of stories planned out for the series?

GWW: The more I write, the more stories I come up with. I could keep going with this for a long time, and I hope I get the opportunity.

CMix: Are you focusing completely on comics now, or are you still doing journalism?

GWW: I stopped doing hard journalism when I returned to the US because I wanted to do more commentary and political writing. (You can’t really do both at the same time, ethically speaking.) Comics are kind of tied up in that — fiction is commentary by nature, whether you’re writing about real-life events or not.

CMix: How do those two relate, or do they?

GWW: Comics and journalism? The point of both is to tell urgent stories and articulate the points of view of people who are overlooked, but they accomplish these things in very different ways.

GWW: I like not having to battle ants, geckos and cockroaches every day. That’s a plus. Other than the blessed lack of parasites and pests, though, I’d rather be back in Egypt. I forgot how isolating life here can be.

CMix: Are you working on any other projects?

GWW: I just finished a memoir for Grove Press, due out next year. It’s called The Butterfly Mosque and it’s about Egypt and Islam and love and a lot of other things. And I may be in the superhero business. But I can’t talk about it.