Comic Foundry #3 Out Next Week 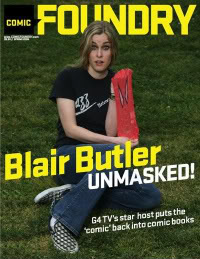 The third issue of Comic Foundry, the well-received new magazine covering the comics lifestyle, is due out next week, editor Tim Leong posted on the mag’s Website.

That’s a Thursday (July 10) because, as always, those damn holidays delay comic books for a day. Here’s what’s on tap for the issue:

Also, I’m pretty sure there will be two or three little items from yours truly, if all goes according to plan. I wrote a retrospective and a couple of (I hope) funny lists, so keep your eyes peeled.

Me aside, it’s a fun magazine — sort of the anti-Wizard — and is worth checking out. After all, it ran a feature on the best superhero underwear.

At right is the non-final cover, featuring Blair Butler of G4 TV.