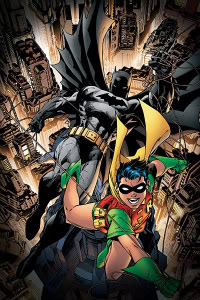 A couple years ago, back when Frank Miller and Jim Lee’s All Star Batman and Robin

started inconsistently shipping, I read the first few issues and then waved the series off. I hated it so much I added an extra “S” and started referring to it by the acronym ASSBAR.

At the time, it seemed like a good portion of comics critics felt similarly about the book. Then a curious thing happened. More and more reviewers started to come around to the new, harsh [[[Batman]]] that called Robin “retarded” and tried to kill cops.

Now with the first volume conveniently collected, I decided to revisit the series. Had it improved? Had I just given up to early? Or was it still ASSBAR?

As much as I love that nickname, I may have to retire it, because this series is not as bad as I first thought. Miller displays a near-mastery of pulp dialogue and narration, and Lee proves what everyone already knows, that he’s a master draftsman of superhero comics.

In case you’re one of the select few who haven’t read the book, it’s a wholly new take on Batman’s first years, and he’s portrayed as essentially a psycho. Which, in a lot of ways, makes sense. You have to be pretty nuts to put on tights and kick the crap out of muggers.

But Miller pushes it to ugly extremes, with Batman kidnapping Dick Grayson and forcing him into the war on crime, nearly killing fellow superheroes and possibly killing corrupt police officers. This Batman is completely unhinged, which becomes fully apparent in a later issue when the Joker appears and seems sedate by comparison.

Now, this is what Miller does well, crackling along at the harsh edge of humanity as he has in Sin City

and elsewhere. But there are two inherent problems: First, this goes against every incarnation of Batman we’ve seen and degrades the character. Second, and most importantly, that degradation doesn’t work because it’s paired with Lee’s artwork.

The biggest problem here really is the creative team, as Lee’s art represents the superhero norm. His clean, highly detailed and gregarious style evokes the action-heavy, reader-friendly adventure comics. There is nothing dark or edgy about his work, and so paired with Miller’s script it creates a sense of cognitive dissonance. These two do not match.

I can only wonder if Miller’s script would be more effective paired with his art, all harsh lines and heavy contrasts. His successes have all come in books that he’s either drawn himself or teamed with a similarly gritty artist.

That said, I’m still not entirely sold on this thought, as the script becomes painfully stilted at points, especially during Batman’s lengthy narrations on how much he loves to break criminals’ bones. It almost seems in places as if Miller is testing the limits of excess, seeing how far he can go before readers storm the gates to tar and feather him.

Shortly after the famous (and oft-quoted) issue in which Batman declared, “I’m the goddamn Batman,” Miller responded to the loving response by filling a subsequent issue with some dozen or more “goddamn Batman” references. Instead of coming for Miller’s head, the fans lapped it up.

Which, in a way, I can understand. Who doesn’t like to have an occasional macabre fantasy?

But, for good reason, those fantasies tend to be fleeting. If only I could say the same about this series.