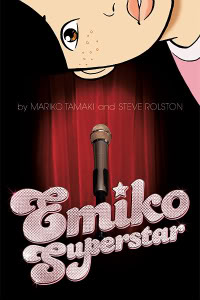 There are no shortage of comics that feature an "ordinary" central character who decides to venture into the "strange" side of life. Emiko Superstar

(Minx, $9.99) follows that well worn path, but it takes a surprising turn and ends up as quite a pleasant read.

Emiko is a teenage girl, something of a dork living a boring suburban existence. A summer of mindless minimum-wage labor is interrupted when Emiko sees a public outburst from an "art freak" and learns of an underground arts scene.

An outsider trying to break into a group of outsiders, Emiko unsteadily inserts herself into the scene, learning all the expected lessons (freaks are people too, you can discover yourself through art).

Ho hum, right? Except not quite, as writer Mariko Tamaki twists the book cleverly, pointing out that cool outsiders have as many problems as most people. That revelation is balanced by another, of the serious problems seemingly normal people have.

Life’s a big mess, Emiko learns, and sometimes you have to work hard to get through. Who can’t relate to that?