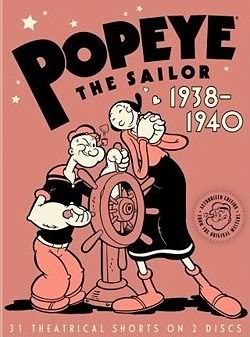 Next January, E.C. Segar’s cartoon creation Popeye turns 80. That’s a good run, especially for a character who still wasn’t showing many signs of his age in the 2004 TV special Popeye’s Voyage: The Quest for Pappy

While Popeye might not have aged over the years, he certainly has changed, which is clearly evident in the contrast between two new DVD collections of [[[Popeye]]] cartoons recently released from Warner Bros. Video.

The first, as mentioned in Michael H. Price’s latest column here at ComicMix is Popeye the Sailor 1938-1940 Vol. 2

($34.98), which contains 31 remastered theater shorts. Created by the Fleischer family’s studio, these are some of the earliest animated Popeye adventures.

One can quickly see why the shorts became a phenomenon, as big or bigger than Disney’s toons (pointed out in an excellent documentary on the Fleischers that’s included). Popeye and the gang are essentially Vaudevillians, pinwheeling through one pratfall after another.

While that means there’s not much narrative richness and little language-based humor (most the characters are unintelligible), the Fleischers were masters of the gags, setting them up as curvaceous rows of dominoes, one slapping down another in orchestrated patterns.

The Popeye of that era was the antithesis of Disney’s happy, pie-eyed fare. Popeye lived in ugly urbanity, and his stories had the rough-and-tumble trappings of that locale.

Fast forward 40 years, to Popeye’s latest comeback, this time in the hands of more recent cartoon legends,  Hanna-Barbara. [[[Popeye and Friends]]] ran on CBS, and had the sparkle of modern animation.

Then in full color, Popeye continued with his oddball adventures. But the youthful verve and edginess of the earlier shorts had long faded, and the series never came close to that old madcap glee.

(eight shorts, $14.97) is set not in the wilds of an inner city but the bland trappings of ’70s and ’80s cartoons. It’s all simplistic, cotton-soft jokes and goofy characters, like Popeye’s nephews (who make Scrappy Do appealing) and a visiting alien.

And, surprisingly, the more modern animation fails to hold a candle to the Fleischer’s innovations. While the Fleischers took every opportunity to innovate and invent (including using jaw-dropping 3D sets), the Hanna-Barbara cartoons offer all the variety and substance of cardboard.