Quite a top-notch week in comics, all in all. We had another Secret Invasion entry and the debut of DC’s Trinity (I’ll be doing separate weekly reviews of that one), as well as strong outings from other series.

There seemed to be a viral outbreak of silliness, though, as a handful of comics pushed the goofy too far and suffered for it. Only a couple of outright stink bombs, which are helping me kick off a new section for these reviews: The Dregs. Now, the reviews… 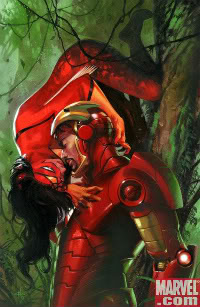 Book of the Week: Secret Invasion #3

— First, let me say there continue to be some serious problems with Skrullapalooza ’08. The series is not even remotely self contained, so any casual fan is probably going to be quite lost, there are a few too many unclear moments (lost either in script or art), and the Skrull invasion force still looks like they were designed by Toys R’ Us.

That out of the way, this issue merits top billing for a few big reasons.

First, the story actually moves ahead after stagnating in the Savage Land. Second, there are some huh-yuge fights, and Leinil Yu takes a bellows and pumps them full of hot air. Third…

We need a big SPOILER WARNING for this. Third, we learn the biggest reveal in modern comics memory, that this colossal, inconsistent prick of Tony Stark who has embroiled the Marvel Universe isn’t really Tony Stark. Gasp. He’s a Skrull.

— This series ends with a graceful if unsatisfying issue, filled with more sparsely worded craziness (giant flying eel?!?) and Abe continuing to wonder how he stacks up. "You aren’t Hellboy and you never will be," he tells himself. But, like Hellboy, he learns the crucial lesson that guns usually don’t stop supernatural forces.

The shining light of this series is artist Jason Alexander, who lends everything a perfect ephemeral, abstract air. The good news is he’s going to be doing more BPRD work.

Omega the Unknown #9 — Jonathan Lethem and Farel Dalrymple’s bizarre cerebral odyssey is nearly at an end, and this penultimate issue brings the Omega and robot forces to a head in a big way, with the world at stake. Still, things are never too heavy, and despite a dramatic death it ends up being the most rambunctious issue yet.

The All-New Atom #24 — Since Rick Remender took over writing this series, he’s been pushing toward extremes, with each issue crazier than the last. Now, we may finally have an answer for how crazy is too crazy. Lady Chronos pops in and out of the timestream, Booster Gold saves the day and multiple Atoms come on scene, but it never coalesces around the central story.

The Boys #19 — This came super close to making the cut, as it’s a tense and revelatory mix of one of the Boys learning the conspiracy behind Homelander and the heroes while Homelander learns the secrets behind one of the Boys. And it has the line of the week: "I hear you’re a conspiracy nut… It ain’t ancient gods an’ aliens an’ coded shit on the dollar bill. It ain’t even a secret, it’s somethin’ ordinary folks do for a livin’ every day of the week. It’s business."

— This is one big beatdown between the crazy Japanese vampires and the massed slayers, and for the most part it’s a classic romp’um stomp’um. But things stray into silliness to the point that it becomes campy, which saps the emotional heft. Mecha Dawn? Groan.

— Matt Fraction’s take on shellhead continues to be slick and smarmy like the film, though without Robert Downey Jr.’s charisma to put it over the top. Essentially, things go from bad to worse, as Stane’s evil plans spread and Stark can’t keep up. 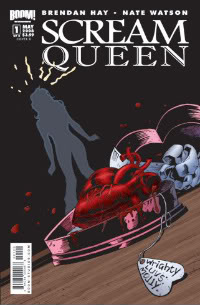 Scream Queen #1 — The latest Boom! Studios series features a creepy murderous dude who falls in love with a high school girl. Hilarity ensues, as they say. It captures the humor of campy horror to great effect, but largely because of the art the horror never seems horrifying.

— There’s a great line in here ("God is an idea, not a reality") that goes a long way toward making sense of the gods in the DCU. Couple that with some interesting moments from the revealed Gog, the return of Black Adam and a touching moment for Damage and you have a bunch of nice moments, even if they don’t fit together well.

Nova #14 — This series continues with the never-fail angle of throwing ever bigger problems at its hero. Nova vs. Silver Surfer. Nova vs. an evil spirit. Nova vs. Galactus. By focusing a tight eye on these huge problems, writers Dan Abnett and Andy Lanning make this book a true space epic.

— It’s mystery solvers unite as a murderer hits town and the new "good" Riddler returns. There’s an almost great sequence of Batman and other heroic detectives chatting online about the case, but it’s never clear enough who’s who, so it ends up as muddled coulda-been. And the big mystery brings in a nice angle (that Riddler’s villainous deeds haven’t forgotten him), but it’s not as tightly plotted as we’ve come to expect from Paul Dini.

House of Mystery #2 — This series is going to sink or swim entirely depending on the quality of the stories within the story. Last issue’s was awful, but this one’s pretty decent, with great Jill Thompson artwork to boot. And there’s the start of an explanation to the house’s background, which makes for a solid read.

— The Ultimate universe has been flailing since the perfect storm of lateness on Ultimates 2 and the flop of the Ultimate Galactus story. This series seems to be striving for revival, but it has too many inconsistencies (a green Hulk and super-powered Nick Fury), which drag down the only relevant revelation, that scientists created mutants.

— This series continues to make the mistaken assumption that if the superheroes don’t look like superheroes, then it’s "realistic." In truth, it’s more over-the-top than many superhero books and the "hero" continues to be such an unlikeable schmuck that it’s impossible to care for his plight.