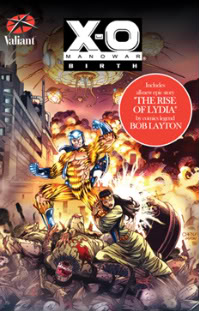 that you can’t help but smile while flipping through this paragon of 1990s comics.

(though far better than such a comparison implies), [[[X-O Manowar: Birth]]] (Valiant, $24.95) collects the series’ beginnings as Aric, a fifth-century Visigoth, escapes from his alien captors with the aid of a miraculously powerful suit, then finds himself in the modern world.

The creative team — Bob Layton, Jim Shooter, Barry Windsor-Smith and Joe Quesada — push the fish-out-of-water story to the extreme, with the evil arachnid-like, laser-zapping aliens on a quest to enslave humanity and only the brutish, idiotic Aric standing in their way (actual sample of Aric’s dialogue: “But why I can… no… uh…”).

The story is completely over the top and doesn’t offer much to ponder over, but it’s also not striving for that. Screw pathos, this is a down-to-the-last-out laser battle with spider aliens! Aric bounces from one fight to another, and each comes through with a surprise or two.

Included are issues 0-6, with some scripts and original drawings for issue 0, and the original story “[[[The Rise of Lydia]]].” The collection is also recolored and remastered, and it’s an attractive hardcover volume. I’d recommend this primarily for those who either are long-time X-O fans, or for those who can’t pass up a good, messy fight with aliens.