The Squires of Science, by Dennis O’Neil 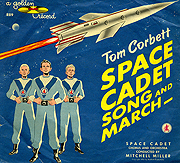 We were the Squires of Science, my friend Mike and I were. He went to public school and I was a sixth- or seventh grader at St. Louise de Marillac, but that didn’t keep us from palling around together, watching Tom Corbett, Space Cadet on his family’s television set and doing chemistry set experiments in his basement. Actually, I don’t remember doing many experiments – we squires weren’t really much into real science – but Mike, who was good with tools, made us a plaque and, well…we believed in science. Maybe not as much as I believed in the Father, Son, and Holy Ghost, but still a lot.

I was also reading a lot of science fiction, thanks to the public library, and I guess Mike was, too.

Adolescence disintegrated the Squires of Science. I was off to a Catholic military school – and yes, you may snicker – and Mike went…I don’t know – probably to Beaumont High, which we Catholic kids thought was kind of wicked, in some ill-defined way.

About then, I began to realize, dimly, that science involved mathematics. I had never been really good at arithmetic, which caused me a lot of grief at old St. Louise, and I seemed to be getting worse as I grew older. Then I flunked freshman algebra. Had to go to summer school. It wasn’t exactly a disgrace, but it wasn’t exactly not a disgrace, either.

I still read science fiction, more avidly than ever, but I was done with science – the genuine article. The good Christian Brothers never burdened me with classes in geometry, physics, or chemistry, and so I blundered, scienceless, on into college. There, I got a D in the one math class required for liberal arts types, which, I had to admit, was better than the F in algebra I’d nailed four years earlier, and then…Glory Hallelujah, I was done with numbers.

I was also savoring sour grapes. I had absolutely no aptitude for math, and probably none for science, though that was never really tested, and so I thought the people who were good at those disciplines, the physics and chemistry crowd, and especially the engineers and – the lowest of the low! – the commerce and finance students, were somehow…I didn’t know what. Uncool. Philistines. Bourgeois. Something icky, anyway, and no, we don’t have to define what precisely that is.

Life took unforeseen bounces; I lived a bit, moved to New York and, at age 32, found myself holding a novel with my name on it that had been published at science fiction.

I knew I knew nothing of science, and it didn’t seem right, somehow, me being a published sf author and all. Could this lack be remedied? The answer was a qualified yes. There were beginning to be popular science treatises available and though not all of them eschewed my ancient enemy, math, some did. The one that first impressed me was titled One, Two, Three…Infinity. It was written by a Russian-born physicist and cosmologist named George Gamow and it’ll do for this week’s recommended reading.

I guess we should return to this topic.

Dennis O’Neil is an award-winning editor and writer of Batman, The Question, Iron Man, Green Lantern, Green Arrow, and The Shadow – among many others – as well as many novels, stories and articles. The Question: Poisoned Ground, reprinting the second six issues of his classic series with artists Denys Cowan and Rick Magyar, is on sale right now, and his novelization of The Dark Knight will be available in a couple weeks. Or so.