Let’s be honest: It was a forgettable week for comics. Both Marvel and DC are still trying to get their summer events off the ground, and the rest of their books seem to be treading water. And while a few decent indies hit the shelves this week, none were exceptional.

So, if that’s not enough to get you excited for a big batch of reviews, I don’t know what is. 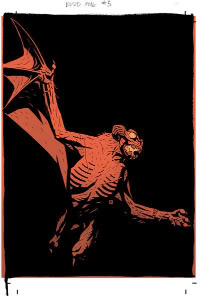 — For a series that started out with three and a half low-key books, BPRD 1946 goes out with a frenetic climax, as Bruttenholm and pals do their darndest to prevent a payload of monsters from being launched into America.

There are also monkeys. Lots and lots of monkeys, all captured in crazed fashion by artist Paul Azaceta (read my interview with Paul right here).

This book continues to work well as narrative backfill, showing the Bruttenholm’s transition from fighting Nazis to raising Hellboy. While there are allusions to events to come, the story never obsesses with self reference, as it’s too busy having fun. Sample dialogue from the villain: "You’re in over your head, stranger! You and your popgun army!"

Lots of credit to Mike Mignola and co-writer Joshua Dysart for pumping out yet another Hellboy property while keeping the quality sky-high. (You can also read my interview with Dysart right here.)

— This series seems to have finally pulled itself out of a long dry spell of one-and-done books that strayed too far from the central narrative. We’re back to Matty in his role of journalist/angry-young-dude, as he covers the campaign of Parco, a mix of Hugo Chavez and Barack Obama who’s trying to jostle the system. As expected, the system doesn’t like being jostled.

When this series is clicking, Brian Wood does a beautiful job of paralleling real events and politics without straining. The DMZ story works all by itself, but it still offers commentary on things like the current election season and Iraq.

The Amazing Spider-Girl #20 — I’ve been wanting to check out this book for a while (and no, not just to spite Marvel’s powers that be), and finally got the chance this week. While it’s a heck of a fun read that really captures the vibe of halcyon Spider-Man stories, I found it far too reliant on using Spidey’s mythos (and clichés). Also, let’s talk about that last page: Another Clone Saga!?!

— Batman RIP begins here, with Grant Morrison setting up a pretty lame collection of villains as the apparent source of the hero’s demise. It’s a big, campy, rambling story. I finally realized after a second read that Morrison is trying to capture the same feel that he’s used to such success in All Star Superman

, only it’s not quite clicking here.

— A perfectly entertaining little side story about cannibals, except Eric Powell doesn’t effectively integrate it into the ongoing Goon narrative, so it just sort of hangs in the air, like a fart, but not as stinky. The backup story more than makes up for that lack of stench, though.

Captain Britain #1 — It’s nice to see a creative tie-in to Skrullapalooza 2008 (Secret Invasion), with the Skrulls invading Britain to capture some magic (literally). And it’s a fine story, though extraneous, and I still wish this whole event incorporated more of the espionage angle. Oh well.

, except this is another universe, or timeline, or something… Like The Brave and the Bold

, this series is plenty enjoyable as a throwback, but it’s still popcorn, even if it’s expertly made popcorn. 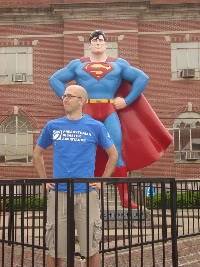 — Superman fights Solomon Grundy! Lex Luthor plots to kill Superman! The Daily Planet is threatened! This could be the most boring issue of a comic book ever, with not a thing that isn’t pointless rehash. It was even less exciting than my trip to Metropolis (see right).

Guardians of the Galaxy #1

— Confession time: I loved the old GotG series, ridiculous as it was. This new series has nothing to do with that, instead just a random teamup of characters from Annihilation who fight against a random villain. But maybe I just refuse to like GotG if it doesn’t include that blue guy with the huge red mohawk and an axe for a hand. He was awesome.

Transhuman #2 — I decided to give this story a second try, but it still just strikes me as an illustrated outline of a story, a fictional lecture accompanied with slides. No thanks.

Titans #2 — Another disappointment in a week full of them. This is a book for Titan lifers and no one else, as it is a too-cheeky stroll through Titan nostalgia, further marred by some terrible layout.

Cthulhu Tales #2 — Steve Niles and Lovecraftian horror seems like an unbeatable combination, but his story is actually the weak link in an otherwise solid collection of horror.

— Professor Xavier confronts the demons of his many failures, which is surprisingly compelling, considering it’s been done before. While the journey is worth reading, the destination is a bust, as Xavier makes a seemingly out of character decision that shows, more than anything, how little he’s learned.

Wonder Woman #20 — Over in Marvel’s Thor

, you can see a great example of a god character being split expertly between the worlds of gods and men. That’s the same kind of thing Gail Simone is trying for here, but it just doesn’t work, instead becoming two disparate stories that don’t intertwine well. Also, there’s still no sense of where this character is headed.