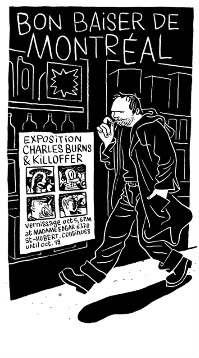 As much as that might create a challenge for the volume’s shelf presence, it sets a fitting tone for the stories within, all beautifully illustrated pieces that are in turn harsh, ugly, violent, depressing and hilarious.

The best of the lot is "Einmal Ist Keinmal," a wordless story from French cartoonist Killoffer (that’s his work at right, though not a page from MOME). His two-tone work, reminiscent of Jaime Hernandez’s art, elegantly portrays the life of a woman living in a world where all men literally look the same, featuring the grim, Cro Magnon-ish visage that Killoffer uses to represent himself. It’s a story that begs for repeated readings to decipher the author’s thoughts on the ugly side of masculinity.

The 20 other pieces are an assortment of new chapters in continuing stories, standalone pieces and a lengthy Gary Groth interview with Ray Fenwick (a must read for those interested in typography). Tom Kaczynski crafts a mournful diatribe against new age businesses and Nate Neal weaves a bizarre tapestry of cartoon oddity, among other highlights.

This is one of the more cohesive and consistent volumes of MOME, with a handful of great pieces and no weak links. Recommended reading, at least for those who like their comics with a nasty edge.