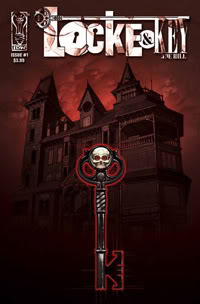 The Los Angeles Times just had a story about the boom in comics-to-film. In a recent six-week stretch, some 22 comics properties were optioned, the paper reported.

That includes Locke & Key, the supernatural thriller by Joe Hill for IDW (cover at right). While this is great news for many and illustrates the growing popularity of comics, not everyone is looking at the boom with rose-colored glasses.

"It’s accelerating because right now it’s fashion," says Frank Miller, who created the graphic novels behind "Sin City" and "300," and whose early-’80s series "Ronin," about a reincarnated samurai battling evil in a futuristic New York, is being adapted by Joby Harold ("Awake") for Warner Bros. "I think we can expect it to calm down. Comic books have always been this vast mountain range that gets strip-mined and left behind."

The main point of the story, though, is that one reason so many comics are adapted is that comics and graphic novels are substantially easier to read than screenplays. Miller calls screenplays the "single [worst] story form" and "unreadable."