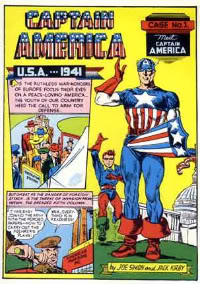 Speaking to The New York Times, Captain America co-creator Joe Simon reflected on the character and his struggle to gain some of the rights to the Captain America franchise. Simon will be one of the speakers at this weekend’s New York Comic Con.

Simon and Jack Kirby ended up leaving the franchise after fighting with publisher Martin Freeman over royalties, and they ended up at Detective Comics. Simon recalled that skirmish:

“We always felt ‘we wuz robbed,’ as Joe Jacobs, the boxing promoter, used to say,” Mr. Simon said of his dispute over the ownership of Captain America, which he settled out of court with Marvel in 2003. He said his royalties for merchandising and licensing use of the hero now help pay his legal bills from the case.

But copyright was not on Mr. Simon’s mind when he was conceiving Captain America. He didn’t even begin with the hero. “Villains were the whole thing,” he said. And there was no better foil than Hitler. Who better to take him on than a supersoldier draped in the American flag?