The Shadow’s Web, by Dennis O’Neil 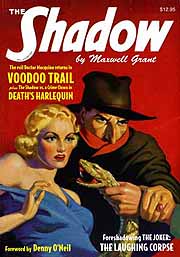 With the kind permission of Anthony Tollin and Mike Gold, this week’s column is an adaptation and condensation of an introduction I’m writing for a forthcoming edition of Mr. Tollin’s repackaging of the original Shadow novels. No formal recommended reading this time, but the volume in which the much longer version of what’s below will appear – Shadow #19 – will be on sale in the latter half of June.

Let us, for just a little while, indulge our wish that the great mythic and fictional heroes did and do exist. We are told – and remember, we’re in believer mode – that a diligent historian named Maxwell Grant was privy to the life and thoughts of a mystery man who, though he was probably born Kent Allard often assumed the identity of Lamont Cranston, one of those gentlemen of wealth and leisure who seemed to proliferate in the 30s, the years of the Great Depression, and become almost extinct after World War Two. We are assured that many years ago, while traveling in the Orient, that he acquired certain extraordinary skills – they might even be termed “powers” – and that these aided him in the activities of another of his personae, the relentless and dreaded nemesis of crime known only as The Shadow.

Now, let us entertain a hypothesis. It’s possible, perhaps even probable, that our eastern sojourner, during his investigations, came across reference to Indra’s Net, perhaps while thumbing through a yellowing old volume he found in a bookshop located in a winding Calcutta alleyway. (Would the book have been written in Hindi? Likely. Would Mr. Allard have mastered enough of that language to read it? Again, likely.) Being the ever-curious investigator he had to have been in his salad days, Mr. Allard would have made further inquiries regarding this “Indra’s Net.”

In Svarga, the realm of the god Indra, there is a network of gems arranged in such a manner that if a person looks at one of them he sees all the others reflected in it.

We can imagine him memorizing this information, in the event that some day, somewhere, it could prove useful, then replacing the book on a shelf and hurrying away to witness the miracles of a fakir in a dusty plaza nearby – something like hypnotizing a cobra, perhaps,

To the best of our knowledge, Indra and his net – let’s make that capital-N, Net – never became a concern of The Shadow, were never an element in one of his exploits, at least not in the not-quite-real world he and his fellow noble vigilantes inhabited.

But in our world…well, here and now we can draw a connection between the Net and The Shadow.

But first, let me briefly outline a few of metaphorical uses others-flesh-and-blood, carbon-based life forms like you and I – have put the Net to.

Physicists have used it to describe the holographic nature of the universe. (The idea is, every bit of a hologram contains information about all the other points.) It – the Net – has also been used to symbolize the interconnectedness of all things, and universal creativity. That doesn’t begin to exhaust the list, but it will do for our purposes. Now, I’d like to add another phenomenon the Net might symbolize: popular culture. Like the others I mentioned, it concerns connectivity and causality.

Our contention is that The Shadow is a gem in Indra’s net. A bigger, shinier, more resplendent gem than most, but a gem nonetheless. Peer closely at its westernmost facets, and you see reflections from the past, heroes who led bands of brethren on perilous and noble exploits: Odysseus, Jason, Aeneas, El Cid…the list could be continued, but why bother? You get the idea. Look more – did you see that? A man was standing there and then, suddenly, he wasn’t. Oh, I know. That was H.G. Wells’s Invisible Man and he’s reflected in The Shadow’s gem because the version of The Shadow who had a weekly radio program had the “power to cloud men’s minds,” making them unable to see him. Some more reflections: The Scarlet Pimpernel, Zorro and – here the images are, I admit, hazy – all those mythological figures who engaged in shape-changing.

Now look on the other side of the gem, to the east, and see what is reflected from the future, heroes created after the Shadow…well, the images are a bit murky. But there’s Invisible Scarlet O’Neil not being invisible (we should have known she’d show up in this particular essay). Is that the Lone Ranger? The Durango Kid? Surely, that is the Green Hornet. Sandman? The Spider? Ah, but look – one figure towers – stands plain and clear. He first appeared in what was, at the time, a new format, then and now calledcomic books, in 1939: the Batman, these days usually referred to without the definite article.

Are we getting the idea that the Net is vast and each gem shows a lot of reflections?

Writer / editor Dennis O’Neil was one of the many honored Maxwell Grants, dominating the 1970s take on the character.

Nostalgia Ventures’ The Shadow series is available at your local comics shop (check with the clerk) and at better book stores and the big-box bookstore online services . Editor Anthony Tolin will be appearing at the Windy City Pulp Con in Lombard Illinois April 25 – 27; that same show will also feature ComicMix‘s own Andrew Pepoy and suffer, on Saturday afternoon only, ComicMix E-I-C Mike Gold.