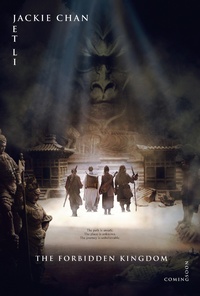 Granted, I’m not the sort of person you should see this film with. As the author of multiple martial art movie books, a martial art hall of fame member, a tournament gold medal recipient, the co-creator of Jackie Chan’s Spartan X

comic book, and a columnist for Inside Kung-Fu

magazine, I’m like that history expert at a war movie who grumbles things like “that plane wasn’t in service until the following year,” or “that isn’t the right insignia!”

Even so, suppose you had two of the film industry’s greatest, say, dancers, like Fred Astaire and Gene Kelly. Would you attach unnecessary, distracting wires to them in virtually every scene, diminish their physical genius with intrusive special effects, jerk the camera around with every move so their choreography was obscured, convince them that all “the kids” wanted to see was the peppermint twist, paste together a plot that showcased the dance culture of Zanzibar, and saddle them with a pretty, vapid (or pretty vapid) supporting cast who could dance about as well as Fred and Gene could sew?

Well, that’s pretty close to what they did to Jackie Chan and Jet Li in [[[Forbidden Kingdom]]], not to mention choreographer and executive producer (in name only) Yuen Wo-ping. The wire and FX stuff is a precise comparison to the previous paragraph’s dance fantasy, but it really starts getting insulting when someone obviously told all involved that “Ultimate Fighting” was really what Americans wanted– dooming Jackie and Jet to monotonous straight-armed punches and kicks throughout, without an iota of the versatile, involving brilliance they display in their many kung-fu classics.

In fact, they’re essentially kung-fu eunuchs – blatantly deprived of their trademarks: Jet of his powerfully graceful taichi influences, Jackie of his ingenious use of props, and Yuen of his exciting fight orchestration. The sets may be pretty, but they might as well be cardboard boxes for all they’re used. Even though Jackie and Jet’s well-won charisma can’t be completely snuffed, their demoralization is obvious, especially in Li’s reticent performance as the Monkey King. They, and Wo-ping, must’ve taken great solace (and shame) in the fact that this effort can’t come close to comparing with their accurate, nuanced, beautifully orchestrated, involving work in Drunken Master

, and Once Upon a Time in China

, among oh, so many others.

The rest becomes increasingly derivative … and not of the right sources, either. The plot cribs from Last Action Hero

in that the “star” is a bland, stereotypically vacant, short-term-memory afflicted, inexplicably contrived (he can hardly get on a horse yet a second later he’s galloping like John Wayne), cliche-spouting white boy chosen to return the Monkey King’s magical stick to an Epcotty, Chinesey “Oz.” The story steals its structure from Big Trouble in Little China

in that the filmmakers “borrow” from a variety of superior Hong Kong productions and mash them into a U.S.-centric chop (or, in this case, punch) suey. And the film’s bookends are pure Karate Kid

… up to and including the bland, blind, brutal, style of fighting the kid pulls out at the end.

and even his two Stuart Little

, Fearless) as hardly more than an embarrassing (and vaguely offensive) Fu Manchu knock-off.

Admittedly, one “hairline” idea is effective, but really, the only grace note for me was that they changed the film’s title from King of Kung Fu. Considering the predictable, ham-fisted, and ham-headed Forbidden Kingdom – whose palpable character arcs were probably dictated by a marketing committee – that would have been truly insulting, not to mention a bald-faced breaking of all truth-in-advertising laws.

would be well-advised to ignore this, see the aforementioned good Jackie and Jet films, wait for the superior [[[Kung Fu Panda]]], mourn for the Chan/Li team-up that could have been (and might still be, since Jackie has announced that he and Jet are planning another film of their own), and know that, in terms of real kung-fu, virtually every Forbidden frame is a lie.

Ric Meyers is the author of Murder On The Air

, Doomstar, The Great Science-Fiction Films, Murder in Halruua, For One Week Only: The World of Exploitation Films

, Fear Itself, and numerous other books and has (and sometimes still is) on the editorial staff of such publications as [[[Famous Monsters of Filmland]]], [[[Starlog]]], [[[Fangoria]]], Inside Kung-Fu

. He’s also a television and motion picture consultant whose credits include The Twilight Zone

and [[[The Incredibly Strange Film Show]]].