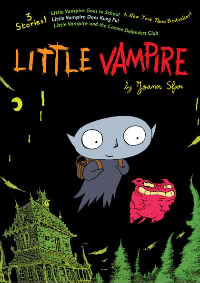 There are three stories in the new Little Vampire

collection from First Second ($13.95). In the first, the little vampire makes friends with a living boy, Michael. In the second, the two overcome a bully. In the third, they protect a pack of dogs.

If those sound simplistic, they should. The stories spun by the French cartoonist Joann Sfar are quite basic in structure, making Sfar something of a European corollary to James Kochalka.

Inevitably, though, Sfar’s stories take on a rich feel, their depth created in a thousand little interactions among the characters and in the seemingly endless details scratched into the margins of panels.

Those details might strike some parents as shockingly severe. The monsters inhabiting little vampire’s home are more frightening and gruesome than cute (think Beetlejuice

or Nightmare Before Christmas

). And their actions mirror that ugliness.

One monster is obsessed with poop and even pushes around a wheelbarrow full of it (which eventually becomes a minor plot point). In the story of the bully, the monsters actually kidnap and eat the bully that has terrorized Michael (acting out MIchael’s dark fantasies). The story then becomes about using ghostly powers to return the bully to life.

Sfar uses those types of complications to add another layer to the rote tradition of story as parable, twisting cliches in ever more unexpected directions. He doesn’t treat children as innocent or naive, putting his many children’s books more in the tradition of the original fairy tales, not their Disney-fied reincarnations.