On Beowulf and Catechism, by Dennis O’Neil 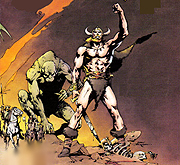 In days of yore, when cowboys and dinosaurs roamed the land and I was an undergraduate in a Jesuit-run university, not knowing exactly what one was supposed to do in a university, much less what the heck I, a butcher’s kid from north St. Louis, was doing at a university, I had what Friedrich Nietzsche might have called a “slave morality.” That is, I felt powerless and I resented and mistrusted every authority figure on the horizon, even the ones who were trying to help me.

Watching the movie version of Beowulf reminded me of one episode in my inglorious academic career.

Somewhere along sophomore year, an English prof assigned a paper to be titled “Beowulf As An Allegory of Redemption.” (I don’t know if that repeats her capitalization. If not, I apologize.) Well. I didn’t think so. Oh, I could, and did, write the paper using some kind of tortured rhetoric/logic/whatever, then, for a creative writing class, I did a paper called “Three Blind Mice As An Allegory of Redemption,” using the same rhetorical devices. The point was, of course, that you can use rhetorical sleight-of-hand to prove anything you want. The subtext was, of course, “They’re bullshitters”– the they being anyone older, more credentialed, better-looking than a butcher’s kid, and maybe anyone who wore a tie. These degree-waving poltroons will twist anything into a Catechism lesson: so my declaration might have gone.

I can’t say I regret the rebellion, though I could have been a lot more constructive about it, because recent history has demonstrated that the naysayers tend to be right and that everyone, but particularly the young, should question everything. (Mr. Nietzsche: “The surest way to corrupt a youth is to instruct him to hold in higher esteem those who think alike than those who think differently.”) However, I’m willing to stipulate that, on the question of Beowulf and allegory, the jury is very much still out.

Beowulf The Movie, until recently on theater screens and now available from anywhere you get videos, seems to be awfully Christian, but with an enormous but (and you kids in the back row can stop sniggering.) Let me now issue a Spoiler Warning and tell you that in this reworking of the story, the hero commits what the Good Fathers might have called a Sin of Impurity that causes later loss of life, including his. Religion 101 here: sin leads to punishment. Sounds pretty gosh-dern Catholic, right?

But…the last minute or so of the movie show a cross falling into the sea and the emergence from the water of the very creature whose blandishments the hero did not resist, a creature, fetchingly embodied by Angelina Jolie, we had reason to believe dead and gone.

Which seems to send a message of its own, one my old prof might find disagreeable. Of course, I might be guilty of the same error I charged her with.

Dennis O’Neil is an award-winning editor and writer of Batman, The Question, Iron Man, Green Lantern, Green Arrow, and The Shadow – among many others – as well as many novels, stories and articles. The Question: Zen and Violence, reprinting the first six issues of his classic series with artist Denys Cowan, is on sale right now, the second volume, Poisoned Ground, will be on sale April 30, and his novelization of The Dark Knight will be available this summer, and you can pre-order them now.