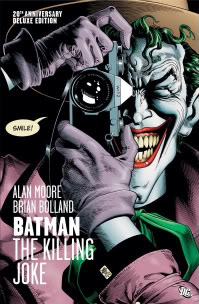 As I picked up a copy of the new Batman: The Killing Joke

20th anniversary hardcover, I flicked open the first page and sliced my finger on its edge. The paper cut seemed fitting, a physical manifestation of the violence contained within the book.

What I always forget about this story in the few-year intervals between readings is just how short it is, at 46 pages. And so each time I’m amazed all over again at how Alan Moore and Brian Bolland teamed to pack such intensity, ferocity and (surprise, surprise) humanity into those pages.

The Killing Joke is without question one of the greatest encounters between Batman and his nemesis, and the real reason is that the story serves both as a zenith for the Joker’s depravity and for his pathos. Even if this origin story isn’t true (as Bolland writes in his afterword), Moore shows a trace of a person behind the maniacal grin. It makes a Joker that’s more real, and more terrifying.

This new edition ($17.99) is of note for the top-notch packaging as well as Bolland’s re-coloring (see the differences between new and old right here). I’m sure there are those who hate the changes simply because it’s different, but the new colors really do improve the book, giving it a subtlety and grimness not present in the original.

The only additional features are a few of Bolland’s sketches and a new short story from him about wanting to murder Batman. It’s not bad, per se, but doesn’t add to the main story and comes across like padding. I suppose it’s a necessary inclusion, though. I mean, 46 pages!