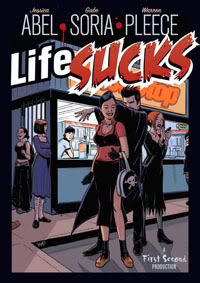 It doesn’t seem a stretch to assume every possible vampire story has been done, from the classics to Anne Rice’s romanticizations to the modern Blade

to the self-obsessed Shadow of the Vampire

to the Dracula: Dead and Loving It

I won’t claim that Life Sucks

(First Second, $19.95) is jaw-droppingly revolutionary, no. But it does deliver a riff on vampires that hasn’t been seen before.

To put it bluntly, Dave is a loser. He’s a wimpy young guy stuck working a dead-end job at an LA convenience store, and he’s in love with a goth girl who doesn’t know he exists. On top of all that, he’s a vampire, which just makes the life of the former-vegetarian all the more miserable.

The story of Life Sucks began several years ago when co-writers Jessica Abel and Gabe Soria were talking about vampires and wondered what it would be like for a young vampire stuck in the real world. After all, vampires don’t just start out with a big castle and tons of wealth, Soria told me.

Like a typical young adult, Dave is just starting out and trying to establish a life for himself. The vampire angle adds to his difficulties (despite a few cool powers), with the need to hide from sunlight, forage for blood and obey his master, Count Radu, the old vampire who infected him and owns the convenience store where Dave works.

Instead of obsessing with drudgery, the authors craft a simple but effective story of Dave’s pursuit of love, one that becomes expectedly complicated given the indie comics background of Abel. Life Sucks works because it’s a good little yarn about young adulthood, with the vampire angle serving more than anything as extra flavoring.

The art, by Warren Pleece, is appropriately grounded and manages to stay lively even during lulls in action. I interviewed him about his work on the book a little back, which you can read right here.