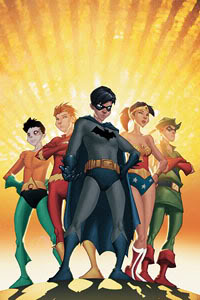 The other day I was talking to James Kochalka, creator of Superf*ckers and the upcoming Johnny Boo

children’s books, and he mentioned how difficult it is to find superhero books for his kids. Such offerings are mostly limited to comic book adaptations of cartoon series that were adapted from comics, he said, and “they’ve been pretty bad.”

For DC, the lifeline to younger readers has long been the Teen Titans, most recently through the TV spinoff Teen Titans Go!

, which is almost too innocent for its own good. Now we also have Teen Titans Year One

(issue #3 is out tomorrow), the “origin” story from writer Amy Wolfram.

The book succeeds on a number of levels, primarily in how it manages to be appropriate for kids without dumbing down. There are serious threats and the group faces violence and danger and interpersonal hangups. The art also perfectly fits the tone.

While I’ve enjoyed the series thus far, I doubt it’ll serve as a jumping-on point for any kid looking to get into comics. Another thing Kochalka complained about was how the youth-oriented Marvel and DC comics rely on readers coming into the book to have a firm understanding of the mythos, and that’s certainly the case with [[[Teen Titans Year One]]]. New comics readers will be fairly lost, if not out and out discouraged by the lack of exposition.

The Year One tag also only hampers the series, forcing it into a ridiculously incongruous existence amid decades-old comics. For instance, these Titans use cell phones and instant messaging, devices that weren’t around when the Teen Titans debuted. That’s nit-picking, to be sure, but when an editor’s note tells me this storyline happened right after [[[The Brave and the Bold]]] #54, I can’t help but be yanked out of the plot.