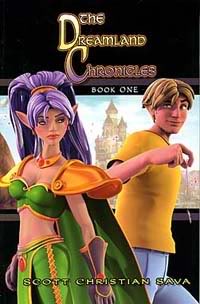 IDW Publishing is best known for its gory horror comics and sci fi adaptations. Which made this morning’s news that the company had purchased an up-and-coming comics studio known for its all-ages fare seem a bit strange.

"I know Scott had offers from many publishers and I’m thrilled that he chose IDW as the home for Blue Dream Studios," Adams said. "I love the books he’s created, and I look forward to helping him reach an even bigger audience."

Blue Dream is likely best known for The Dreamland Chronicles, Sava’s online fantasy comic that’s become a fan favorite, drawing some 4 million readers and earning awards. The story is all computer illustrated, and has also been released in book form.

Though only recently entered into the comics world, Blue Dream has had a fair amount of success, with Disney acquiring the rights to the Pet Robots series and MTV buying the rights to another, Hyperactive. The deal with IDW is most likely seen as an opportunity for Blue Dream books to expand into the print market, where IDW already has a distributor.

According to the release, IDW sees the move as a chance to expand into the all-ages market. Apparently, Steve Niles doesn’t go over too well with the preschool crowd.