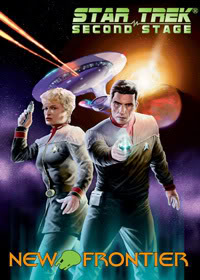 Marking the 10th anniversary of Star Trek: New Frontier, IDW announced it will be publishing a New Frontier comics series written by Peter David. Trekweb has a full report on the series, which is set to debut next month.

The five-part series will feature art by Stephen Thompson (Beneath the Valley of the Rage). The story picks up from the Star Trek novels published by Pocket Books.

David has written several Star Trek novels in addition to his extensive comic book work. The story of the new series is described in a press release:

In the new story, Turnaround, the most dangerous experimental vessel in the galaxy – a prototype time ship – has vanished, and it appears that the man who stole it is none other than Starfleet Admiral Edward Jellico. Only Captain Mackenzie Calhoun and the crew of the Excalibur have a hope of finding him before the ship, intended purely for scientific exploration, is used to disrupt the space-time continuum.