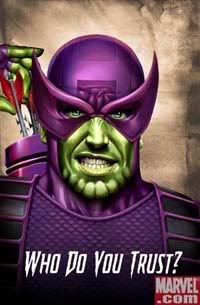 Building up to the summer’s Skrull-a-palooza, Marvel has been sending out a variety of variant covers and promo images featuring heroes depicted as Skrulls. As part of its "Who do you trust?" marketing blitz, Marvel has tried to raise suspicion on most major characters, including the Fantastic Four, the Avengers and, most recently, Wolverine.

Today came the image at right, and for once we have a candidate who actually makes sense as a Skrull: Hawkeye.

While most heroes have good alibis for the looming Secret Invasion, the purple-wearing, bow-and-arrow toting Clint Barton was killed off in House of M by Brian Michael Bendis, who also is writing Secret Invasion and has said he’s been laying the groundwork for this event for years. And since Hawkeye’s return from the dead was never fully explained, he’s a prime suspect.

Of course, this could just be more misdirection, which adds a whole metatextual layer to the slogan "Who do you trust?"