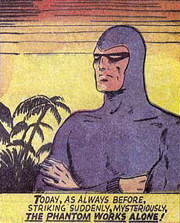 My beloved has just been pushed out of a fourteenth story window and is plummeting toward certain doom. I must rescue her and I will – as soon as I change clothes…

We were discussing, last week, how superheroes are evolving and we agreed – didn’t we? – that, on the whole, with a few notable exceptions, they’re getting grimmer.

They also seem to be changing their taste in wardrobes. None of the current television superdoers wear anything more than normal clothing, albeit sometimes very spiffy normal clothing. Time was, and not so long ago, when…shall we call it unconventional garb was an indispensable part of the superhero thing. Capes, masks, tights, all kinds of bizarre raiment, often in the primary hues that were friendly to the aniline dyes and rather primitive printing presses used to color them.

It began, as did so much superheroish stuff, with Jerry Siegel and Joe Shuster’s Superman. To the best of my knowledge, these pioneers never went on record regarding exactly why they chose this particular visual strategy, but it was a good idea. It gave the their character and immediate and utterly unmistakable image and it separated him from his ordinary brethren as a police uniform or priestly vestments separate the wearers from plain joes and janes, at least when performing unique services. As Peter Coogan wrote, Superman’s outfit “does proclaim his identity.” The costume was obviously a part of Superman’s appeal, and immediate success, and, being no fools, Siegel and Shuster’s army of imitators copied it.

Consider that, for now, the why of superhero costumes. As to the whence…

Very little of Superman, if anything, was absolutely original. (Very little, if anything, of anything is absolutely original.) Jerry and Joe had models from mythology, the Bible, the movies, the science fiction magazines. Joe once said that he was inspired by circus costumes. And other melodramatists had been putting funny clothes on their good guys for years, among them the guys who worked on the Buck Rogers newspaper strip, pulp magazine illustrators and Lee Falk, whose Phantom, although just an ordinary human, wore a mask and oddly cut-and-colored tights. About the Phantom, Will Murray says, “I remember Lee Falk telling me that the Phantom’s seminal costume was part Robin Hood and part medieval executioner.”

Obviously, costumed heroes were an idea whose time had come. (That subtracts nothing from Siegel and Shuster’s achievement; it was they who put the ingredients together in exactly the right way for a brand new medium, comic books, and putting the ingredients together is most of any creative endeavor.) I guess what we’re asking now is, are costumed heroes an idea whose time has gone? Has the genre become too sophisticated for this part of it’s yesterday?

Apparently, those who labor in television think so. None of video’s super folk wear stuff that couldn’t be gotten at an upscale mall. And at least one superhero movie, Unbreakable, did no more than nod to the convention of the costumed hero.

Let’s finish this discussion next week.