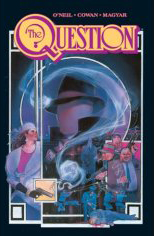 Last week, before I so rudely interrupted us, we were discussing the merits of writing comic books using the “full script” method, in which the writer produces a first cousin to a movie script, with visual directions as well as dialogue and other verbal stuff. Now, we should examine he advantages of working in what has come to be called the “Marvel style.” With this method, you will remember, the writer first does a plot and the penciller renders this into a visual narrative. That’s conveyed to the writer who then adds dialogue and captions and, often, indicates where the balloons and captions should be placed by drawing them onto copies of the artwork.

The main one is that, if the penciller is a good storyteller, he can do the writer’s work for him by figuring out pacing and kinds of shots. When Marvel’s Stan Lee adopted this way of operating, he was working with such as Jack Kirby and Steve Ditko, men who were already masters of their craft. Stan didn’t have to worry about such bothers as a boring but vital plot element being eliminated or the pacing of the story being off so that a lot if crammed into the last pages, maybe not leaving enough room for copy. And – when you work with really good artists there’s always the possibility that they’ll improve on your visual storytelling. They will, in other words, make you look good and who doesn’t like that?

When I first worked for Stan in the 60s, our plots were pretty terse, a couple-three paragraphs or even less. But remember, we were usually collaborating with highly experienced artists. When I last left Marvel, in 1986, the plots were generally much longer and closely detailed.

Then there’s Doug Moench, whose plots for 22-page comic books might run 25 pages and include swatches of dialogue. I once asked Doug why he didn’t just do full scripts and save himself some hassle. His reply was that sometimes art inspired him, gave him a character twist or bit of dialogue he would not have thought of otherwise. And this procedure also functions as a fail-safe mechanism – if something isn’t in the art that needs to be there, or if something is unclear, Doug can write to remedy the problem.

Here, my friends, we have a man who is both conscientious and a complete pro.

For a while some years ago, the Marvel style ruled – or at least would have won popularity contests. Now, I’m told by working comic bookers, the full-plot method is much the favored. I don’t know why. It might have something to do with the fact that now, as in the past, deadlines are a major editorial hair-grayer and the full script method is a tiny bit easier to manage because it involves fewer exchanges of material and maybe a little less paperwork. Or maybe, like so much else, these things are determined by evolutionary cycles I can’t quite wrap my brain around.