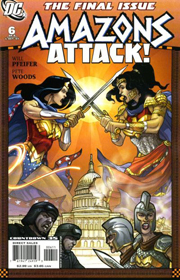 At Heroes Con in Charlotte this past June, one convention goer asked DC EIC Dan DiDio what was the point of Amazons Attack

. “What’s the point of any comic?” DiDio quipped back, leaving me to believe that the point was in fact simply to separate me from eighteen dollars and eat up ten minutes of my life for each of six months.

It’s been a couple of shaky years in the world of [[[Wonder Woman]]] fandom; turning her into a killer, handing the mantle off to Donna Troy – which you would have missed if you blinked, the “who is Wonder Woman?” plotline which I’m not even sure has started but was touted as ”next” at the end of issue #4, which then begs the mention of the sporatic publication of the book itself mere months into the re-launch of the series.

After all that, “the first major comics event of 2007,” as the house ads touted, should have given us six action packed issues that could not be contained in the regular monthly title. Instead, [[[Amazons Attack]]] was confusing, boring and left me month after month echoing that Charlotte fan’s question.

Why was this a mini-series? This story could have easily been told in the pages of the monthly [[[Wonder Woman]]] book, and then perhaps they wouldn’t have replicated numerous scenes in multiple publications across one month, while leaving questions up in the air because it was so easy to not pick up a tie-in or read them out of order. Was the project ill-conceived or just poorly managed?

The art was amazingly varied from the main AA book to the tie-ins, it was sometimes hard to see where they tied in since there visual cues were often non-existent. Sadly, the art in the main title fell short: there was something lacking in what Pete Woods did that left the characters looking very flat and ill-defined facially.

It only being a few hours since I finished the series, it hasn’t sunk in yet that the whole thing served only one purpose: to set up Jim Starlin’s The Death of the New Gods

Granny Goodness has somehow been posing as the goddess Athena and manipulated the whole war. So now cities like Washington D.C. are ravaged, the Amazons are scattered to the four winds with no knowledge of their true nature, Circe is in Hades and Granny is running Mt. Olympus (she’s imprisoned the entire Greek pantheon.) In fact at this point if it doesn’t lead into DotNG I’ll be even more disappointed because then, in fact AA will have accomplished nothing that vaguely warranted a mini-series.

. The TT tie-in issues were compellingly written and beautifully drawn! I found myself caring far more about those ongoing storylines than anything that was going on in the WW/AA books.

If anyone can tell me how Diana got back from Mt. Olympus and the other major plot points that only got covered in one tie-in issue of [[[Catwoman]]], I’d be mighty grateful since I managed to miss the one issue that covered ground all by itself: With great tie-ins comes some responsibility.