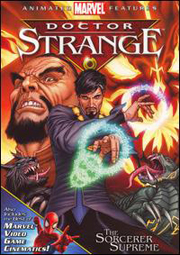 What to do with Doctor Strange?

That’s a question Marvel creators have been asking ever since Steve Ditko left town with the original Eye of Agamotto. A lot of people gave it a shot over the past five decades, and, to be fair, several did a first-rate job. But they had a hard time recapturing the original magic.

This week, Marvel Studios released its [[[Doctor Strange]]] D2DVD, and, being a self-contained 75-minute effort, they took some liberties with the ever-evolving and sometimes contradictory comics versions. Overall, I think they did a good job.

This D2DVD is not quite a superhero effort; certainly, not as defined by their previous animated movies ([[[Ultimate Avengers]]] 1 and 2, [[[Iron Man]]]). They keep the most basic elements of the various origin stories and they don’t really alter anything of substance: Stephen Strange is still starts out as the egotistical, self-absorbed, money-grubbing surgeon supreme and within and hour and a quarter is fast-tracked to beatific altruistic sorcerer supreme. Which, if you think about it, is not a good thing for Strange’s master, The Ancient One.

Along the way, though, we see Strange’s journey to supremacy, we get to appreciate his frustrations and see him grow past his ego and get redeemed. Oh, and he gets to fight Mordo and Dormamuu and a boatload of demons along the way. Our Japanese friends could learn a thing or two from Doctor Strange’s approach to limited animation: Marvel took full advantage of the fluidity of the animation form to allow for the mystical poop to really pop.

Of course they made Wong politically correct, so I guess my desire for an all-Asian cliché-fest crossover with the Blackhawk’s Chop-Chop isn’t going to happen any time soon. And they even teased us with a sequel set-up.

The supplemental documentary is first-rate. Not as first-rate as the extras on the new [[[Popeye]]] box-set, but damn good. Their “[[[Origin of Doctor Strange]]]” delves fully into the comic book roots, showing off a lot of art, giving Stan Lee and (particularly) Steve Ditko their due, and interviewing the hell out of the always-eloquent Steve Englehart, whose own run as Doctor Strange writer (much of it with Frank Brunner as artist) was among the series’ very best.

Overall, a nice effort from supervising director Frank Paur and writer Greg Johnson. I suspect all but the most anal-retentive [[[Strange]]] fans will enjoy the experience.