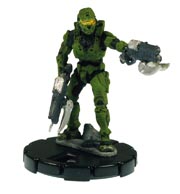 Halo 2 launched to the single biggest day in entertainment history grossing $125 million and, with the third game’s release rapidly approaching, the Halo franchise is looking to extend their dominance to the miniatures market with Halo ActionClix.

Launching in September, Halo ActionClix is changing many of the rules from Wizkids’ other ‘Clix games to make game play more like the video game.  Players can switch weapons mid combat, for example, if you were playing a figure of MasterChief with a sniper rifle and decided that the best weapon for the situation was, in fact, the shotgun you could spend an action to swap out one figure for the other.  Another feature more like a video-game is that figures do not stay dead, rather they will respawn at pre-determined points on the map.

Halo ActionClix also features exclusive Halo 3 preview content.  Figures from the initial set will be from the upcoming game; in many instances this will be gamers’ first glimpse at these characters.

The game launches this September with four- and five-figure booster packs and the Hunter Combat Pack Starter Set.  Subsequent releases will be vehicle packs and an expansion focusing on Halo 3 in earnest, all by the end of the year.