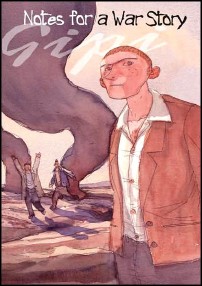 In its original Italian form, Notes for a War Story

won the 2005 Goscinny Prize for Best Script and was the Best Book of the Year for 2006 at the Angouleme comics festival, so I have to assume that it’s one of the very best European works of recent years. Which is unfortunate, since I found it only moderately successful.

It’s set in an unnamed European country, during an unnamed conflict among unspecified groups, in the vaguely recent past. All the non-specificity is meant to give it an aura of timelessness, or of dislocation, or something like that, but it left this reader feeling as if I were wandering about in a fog. Compared to the specificity and closely-observed detail of a book like Joe Sacco’s Safe Area Gorazde

, Notes from a [[[War Story]]] is thin and ineffectual, unwilling to commit to being for anything, or against anything other than the very abstract idea of war.

The plot follows three young men – Giuliano, Christian, and Little Killer – who are scavenging in a region of small villages being bombed by enemy forces. They’re not in the armed forces, and they never encounter anything like regular armed forces, not even as much as seeing a bomber in the sky. They’re supposedly in the middle of a war, but they are actually seen in a mostly-depopulated landscape, drifting into gangsterhood.

The story is told in three parts; the first one, “[[[From the Hills to the City]]],” shows Little Killer leading the other two into a yet-unbombed town to sell some of the things that they’ve scavenged to militiamen. They instead meet Felix, who may also be a militiaman – that’s implied by his later actions – but who mostly functions as a gangster boss in Notes for a War Story. Felix recruits the violent and dangerous Little Killer, and the other two trail along in his wake on a mission to “the city.”

Part two is “In the Big City,” and there Little Killer runs down a list of Felix’s instructions. Little Killer is Felix’s latest soldier, and he shakes down various people for the money they owe Felix, trades unspecified parcels (probably drugs) for money, and gets into trouble with “the Russian,” apparently the head of a rival gang.

All of this is seen through the eyes of Giuliano, our narrator and the one bourgeois boy among the three. He’s unhappy with their work, but not unhappy enough to quit and leave. He acts purely as the look-out, and is jumpy even at that; frankly, he’s not much use to the other two. (Even the third boy, Christian, a dumb happy guy with self-control issues, is more useful to the gang than Giuliano is.) We’re supposed to identify with Giuliano, but I found him a whiny twit, much as his friends did – they’re absolutely right about him all the way along. He is a rich dilettante, ready to rush back home to safety when things get to be too much for him.

The third section is “Notes for a War Story,” which adds a layer of metafiction as a slightly older Giuliano tells the end of his story to a documentary film crew. Again, he’s trying to present himself in the best possible light, but this reader isn’t buying it.

All the way along, we see nothing of the actual war – no bombs, no soldiers, no refugees, not even any dead bodies or battlefields. (We do see a group of militiamen briefly, but that’s it.) We’re told that there’s a war going on, and are supposed to assume that it’s horrible, but we don’t see anything of that war. Giuliano, when he finally has a chance to go to the front and actually fight, runs away yet again.

The title is needlessly arch; the story is not told in the form of notes, or snippets of any kind. Notes for a War Story simply tells the story of these three boys in a naturalistic way, until the third chapter, which adds a slight framing sequence. I’ll grant that this is a kind of “war story,” since it takes place during a war (at least, we’re told it does). But the war, if it exists, is really unconnected to this particular story – it may have been the way that left these particular three boys disconnected from their previous lives, but it didn’t have to be a war, and we don’t see how the war did that. So it’s neither “notes,” nor a proper “war story,” to my mind.

On top of all that, Gipi only draws a very few faces, and the reader must rely on haircuts for identification. So when characters change their haircuts – which they do – it’s difficult to realize who those people are. His art is otherwise pretty expressive, in a European style, but his noses are sharp enough to slice cheese, which I found distracting.

I’m being relentlessly negative here, which isn’t fair: I found the dialogue generally pretty good, and the characterizations believable. The art works pretty well for the story, and is in cool blueish-gray tones that are soothing to look at. My problems with Notes for a War Story are mostly with its conception: it’s going about its business in the wrong way, and it can’t be as successful as it should be given its initial handicaps.

There’s an afterword by Alexis Siegel designed to explain how important and great Notes from a War Story is; I didn’t believe more than four or five words of it. Your mileage may vary. Notes from a War Story is told well, but the story is thin, muddled, and doesn’t really go anywhere. If this was the best comics story in Europe in 2006, I can only hope that was a seriously off year.