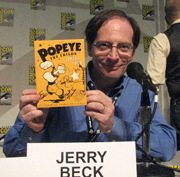 Note:  All you need to know is that Popeye is back, on DVD, this Tuesday, July 31.  If you’re not getting up to go place your order I guess you can continue reading if you want, but that’s all you really need to know.  Otherwise, know that —

The modest and self-effacing Jerry Beck has once again returned from animation’s mountaintop with the real deal in the form of [[[Popeye The Sailor, 1933-1938]]]. Sixty cartoons on four discs, plus plenty bonus features, commentary, the works.  To the purist, and why be in pop culture if not to root out the impure, these are the only Popeye cartoons worth the name.

Not since their theatrical release, all those decades ago, have people been able to see these works as they were intended to be seen.  This of course assumes you are going to show them in a jammed movie palace on Saturday night filled with everyone in your town from eight to eighty who’ve just seen a newsreel starring Mussolini.

I don’t have to tell you that every studio but Disney thought their cartoons were an embarrassing necessity of the business, like Port-o-Sans at Woodstock. Once the studios didn’t need to program short subjects along with their features they dropped them thisquick.

They lived on in fragile prints, before the age of videotape, picking up scratches and noise each time they were put through your local television station’s film chain.  When Hanna-Barbera’s half hour shows became widely available in their second run the broadcasters decided to save themselves a few minutes trouble and ditch the short cartoons for the new, half-hour, self contained shows.

It is some testimony to their naïve sense of duty to their customers that most TV stations had one of their employees put on a yachting hat or an engineer’s cap and pretend to be Sailor Sam or Casey Jones for an hour or so to keep the cartoons from bumping into the commercials.  The half hour TV era cartoon shows let the stations save the money on the host segments (the host was the least of it; they had to light a set and staff the studio: a couple of cameramen, a floor director, a director and an engineer).

But what we tuned in for were the cartoons.  And we could tell the old Hollywood cartoons were the gold standard.  First of all, they were obscure.  We didn’t get all the jokes, didn’t understand all the references, just like when we observed the grown-ups.  There were jokes we got the first time, and we came back because we could instinctively tell from the timing that there were more laughs to be had, and even more precious, insights into the adult world not to be had in any other way.

Olive, for example, at one point sang that she would only consider a “clean shaven man,” a new idea to second grade boys.  Bluto’s beard and Popeye’s stubble were random phenomena to us, like rabbits having long ears.  We weren’t aware of the idle pleasures of beard husbandry or the agony of a daily shave.  But the knowledge of Olive’s preference (and the goddam song) stay with you a lifetime.

Warners and Columbia were glad to get a few bucks for the rights to their now useless films from television distributors in the late 1940s.  The ubiquitous a.a.p. company marketed hundreds of cartoons to greedy television stations.  These cartoons, made by adults for a general audience, were now thought to be perfect children’s programming.  Of course they weren’t.  Children loved them, but so did everyone else.  Adults didn’t watch them because they were working or grabbing breakfast when the cartoons were on.  And the children of the ‘50s dined on a rich diet of adult cartoons, adult comedy shorts and re-runs of even earlier television programs, such as the history of vaudeville and burlesque sketch comedy contained in the Abbot and Costello.

The SDCC panel on the subject featured a couple of guys in the Popeye business today, a darling young couple, in the animation biz, who were, in a stretch of the term, brought together by the one-eyed sailor.  There was Jerry Beck to assure us the restoration was every bit as surreal and scarily sharp as the job done on the Looney Tunes sets.  And there was Tom Hatten.

If you haven’t gotten the idea yet, I love the now almost entirely gone, once ubiquitous children’s television hosts.  Sometimes incredibly gifted, gravitating to the major markets, sometimes Krusty on a Krutch, stuck inside of Springfield. 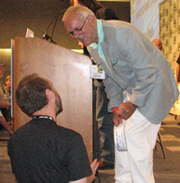 Tom Hatten was Popeye’s man in Los Angeles and so, even though I’d never before laid eyes on the man, I can vouch for his talent and love for his craft.  Part of the job was doing personal appearances around town.  If it was anything like the one’s I went to in Cleveland, Ohio (Jungle Larry) and on Long Island (Soupy Sales) they were probably mob scenes.  Though not an animator, he had to draw sketches of the Popeye characters by the countless dozens.

I had to ask Hatten if he was aware of [[[The Simpson’s]]] Krusty the Clown, and whether he found him funny.  To my surprise, and sort of admiration, he said he found the limited, stylized animation so off-putting he can’t watch it.  He also singled out [[[Bullwinkle]]] for inclusion in that category.  So he didn’t know or wouldn’t say if he found insight or insult in their rendering of his professional fellows.

They played one of the documentary features, on the several people who’ve been the voice of Popeye, including, what I would call a surprise, even for San Diego, that Mae Questel, the voice of Olive Oyl, did a stint as Popeye, too, and was maybe second to the great Jack Mercer.  Mercer brought the character to life with his inspired ad lib comments, rising to brilliance when he would contribute scat fills between the phrases when Popeye would sing a song.

The set is peerless entertainment, higher education and made by my good friend Jerry Beck, whose web site, Cartoonbrew.com is a must visit for all cartoon freaks everywhere.  But don’t worry about some buddy-buddy thing going on here.  If you like Popeye, if you miss those great black and white cartoons (and the couple of color shorts they did) this is for you.  I’ll be the guy ahead of you in line Tuesday morning.  Just don’t blow me down.