MIKE GOLD: The Only Thing To Fear Is… 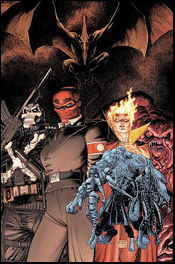 I just read the penultimate issue of Marvel’s Fear Itself miniseries. This means that next month, April, should maybe possibly mark the end of their big 2011 crossover event, also titled Fear Itself. It started a year ago. Longer, if you add the event implants.

The Fear Itself storyline has several epilogues – the Shattered Heroes books, sundry miniseries as well as this particular 12 part miniseries. It ends next month, right in time for the Avengers vs. X-Men event. In total, if you wanted to read the whole thing, you’d be reading something in the neighborhood of 135 separate comic book issues.

All this leaves me with one question: does anybody give a damn?

Like the overwhelming majority of big event crossover series, Fear Itself was pretty lightweight. Yeah, yeah, death, resurrection, worlds shattered, nothing will ever be the same again, and Ben Ulrich updates his résumé. Blah blah blah. If you haven’t read any of this and you are undaunted after considering this task, let me make two suggestions.

One: You do not pile all these books up on your lap. Particularly the hardcover editions. They will crush you, physically and spiritually.

Two: You might want to consider reading the Esperanto edition of James Joyce’s Ulysses instead. You only have so much time in life; go for the gusto.

O.K. I’ve been railing against endless phony dull event stunts for over a decade, but even if Fear Itself was among the best, it went on far too long. We have entered the era of the never-ending event, where one seamlessly segues into the next. Not only are these stories trivial and redundant (Norman Osborn’s back? Really? Next you’ll tell me they didn’t kill off Captain America or the Human Torch!), they no longer deserve the honorific “story.” A story has a beginning, a middle, and an end. A story has at least one climax, and a payoff that justifies your participation. These are qualities that are now lacking in mainstream event comics.

More fool I. As I’ve stated, I’ve been bitching about this for a long time. Yet most of these never-ending tales start off quite well and I get sucked in. Probably the best part of DC’s New 52 is that it wipes out or ignores most of their previous events. Probably the worst part of DC’s New 52 is that, eventually, they’ll do their own big event series – undoubtedly under the pretense of explaining everything that they “decided” not to explain in the individual 52 titles.

If history is any guide, in this they will fail miserably. I’m not knocking the abilities of the writers, artists, editors and editorial directors involved: the odds are overwhelmingly against them. It’s like writing a completely original episode of The Simpsons: after 500+ episodes, good luck with that. However, I am knocking the abilities of the publishers and the marketing executives who take such a short-term view of their bottom line.

I’ve said it before, and unfortunately I’ll have to say it again: What do you say, guys? Let’s try going back to simply producing great stories! You know, it just might work!